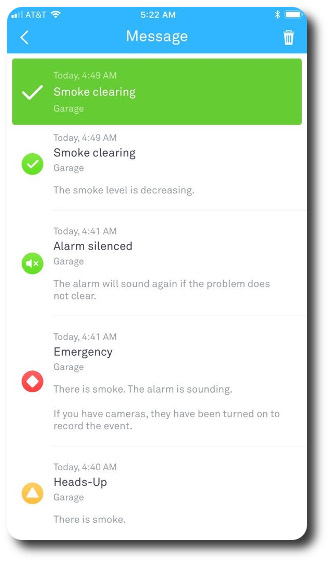 A couple evenings ago, my wife and I were woken at 4:41am by “Heads Up! There is smoke in the garage.” from a calm robot lady in the ceiling. At risk of sounding like a shill, I can honestly say that our Nest Protects saved our house and potentially lives. First off, our house didn’t have any smoke detector at all in the garage when we moved in and a fire starting in the garage would basically have to burn down the whole front of the house before it would wake up someone in the master bedroom. Even if it had a traditional stand-alone smoke alarm, we probably wouldn’t have heard it in the bedroom due to the garage being pretty effectively sealed off from the house proper. A smoke alarm wired into a traditional whole-house beeper system would have woken us up, but cost valuable minutes searching around the house for the cause of the alarm. I felt like a bougie San Francisco knob when I put the Nest Protects in, but now I feel like they were worth every penny. Seriously, I don’t care if it’s a Nest system or one of the knock-offs, but really, get yourself a connected smoke alarm system that can tell you where the problem is. It’s worth it.

Next up, blame. I blame myself for 99.99% of this incident. There were safety precautions that I could have taken and didn’t. (See Lessons Learned.) The remaining 0.01% of the blame, I share with BIQU. BIQU deserves some responsibility because there are no fuses designed into their Kossel Plus Kit at all. If anything shorts out, at best, you’re going to destroy your control board. At worst, you’re going to burn your house down and kill everyone in it.

I don’t know if the safety mechanisms in the Smoothieboard knockoff worked properly or not because I lost all the history when I unplugged the burning printer. I can tell you 100% positively that this fire was not caused by a flaw in the genuine Smoothieboard because my genuine board sits on my bench as a test harness while the throw-away clones are in the machines where they’re more likely to burn out.

Looking at the Evidence 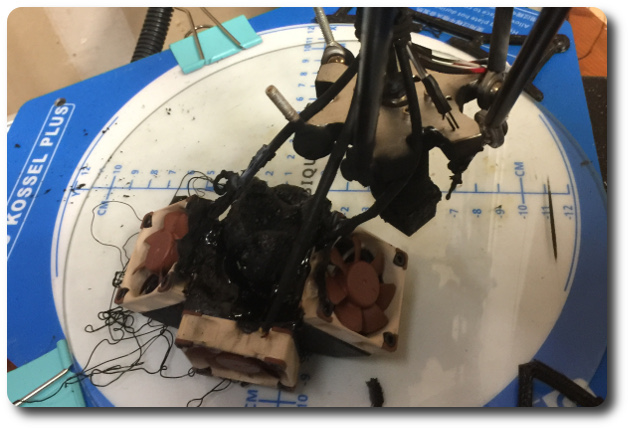 This picture is moments after blowing the fire out. I hadn’t touched / moved anything yet. Initial observations: 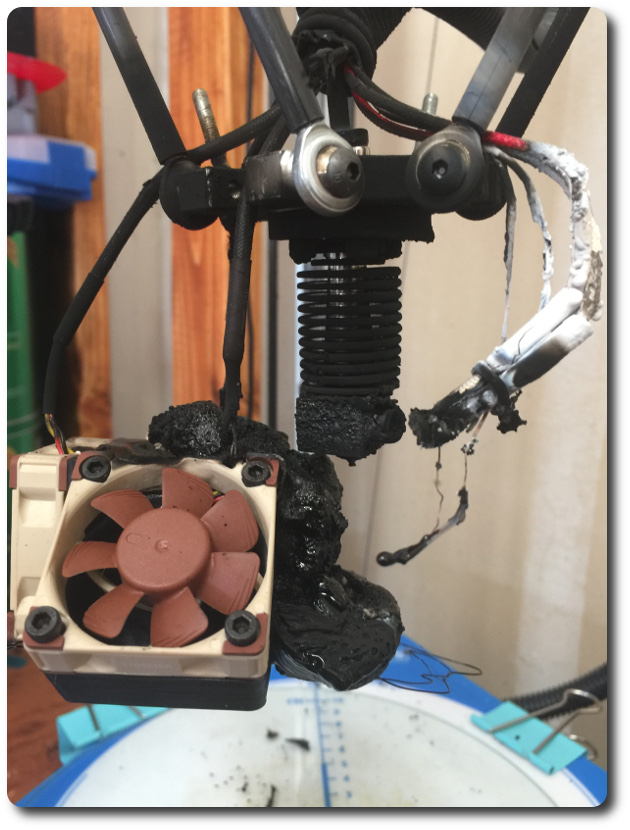 Getting in closer, we start to see things a little more clearly: 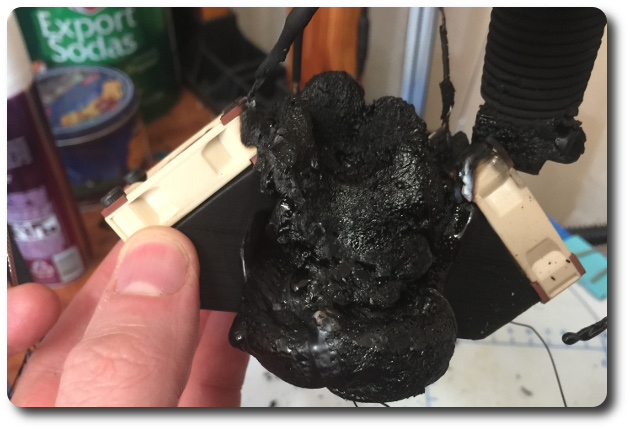 Looking at the back side where the big slot is supposed to be to fit over the hot end and heat sink: 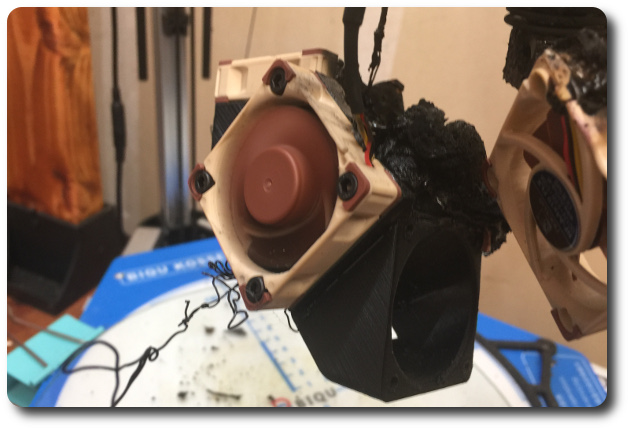 Looking at the front of the shroud: 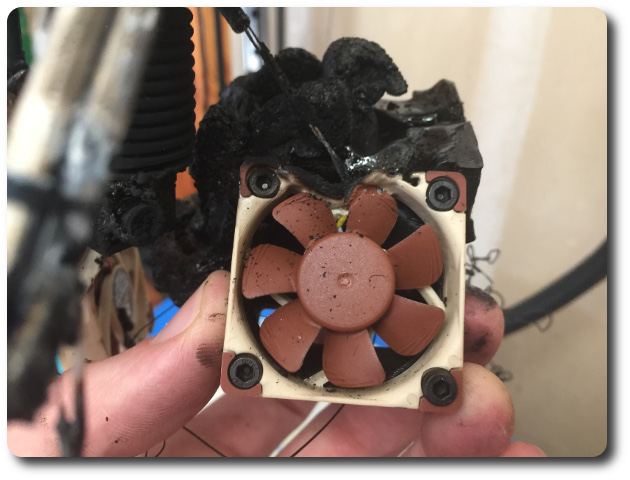 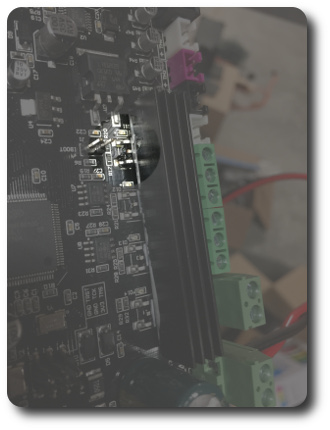 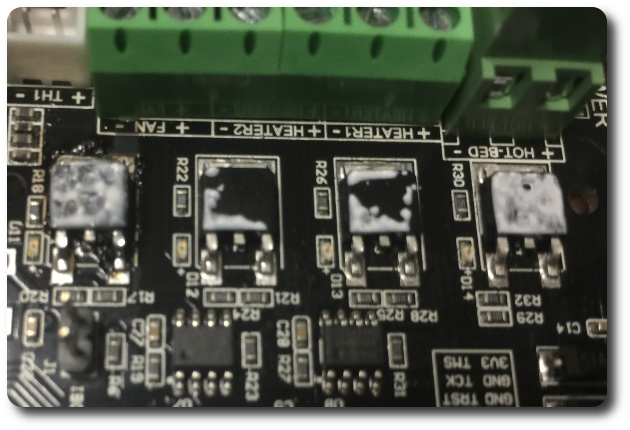 No pictures of this because I would have needed at least three hands and a quick trigger finger, neither of which am I in possession of.

I disconnected the center fan from it’s heavy power line running down to the 12V supply, then took some cheap hookup wire about the same gauge as the factory power lines on the fans and shorted it straight across the beefy 12V supply line. As expected, the insulation disintegrated in a puff of noxious smoke then the cheap hookup conductor lit up like a toaster and very much looked like it would like to start anything near it on fire.

So where does that leave us? Somewhere in the fan circuit, but I’m not honestly entirely sure where. One potential chain of events:

Unfortunately, that doesn’t line up perfectly.

If you have better ideas, I’d love to hear them in the comments.

It’s gonna be a substantial amount of work to get everything rewired and tested, so stay tuned for a new post on all that fun.