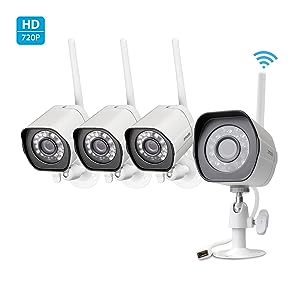 I know what you’re thinking… Dude, you can’t shake a stick at 4 weatherproof wifi cameras delivered to my door for $100. Unfortunately, you can. These cameras are so cheap because Zmodo has removed every feature you might want to setup a secure locale security system and instead ships all of your data to their cloud service for later viewing on their proprietary mobile app. Out of the box, these cameras will not work with anything other than the proprietary kitsch they’re bundled with.

According to the Quick Start Guide, you’re supposed to power up your cameras, then download the MeShare App (iPhone, Android) which will walk you through creating a MeShare Account, transferring you network creds to your camera(s), and viewing your live streams on your phone. There’s no way I’m installing an app on my phone to access a “free” amorphous cloud service, nor am I sending my network creds or survalence data to said amorphous cloud service in the first place. So, let’s see what’s really going on.

While in setup mode, the camera broadcasts a wifi hotspot called ZMD_SAP. It assigns itself 192.168.10.1 and runs a DHCP server handing out addresses in the 192.168.10.2-100 range. Connecting a machine to the network and scanning the camera gives the following: 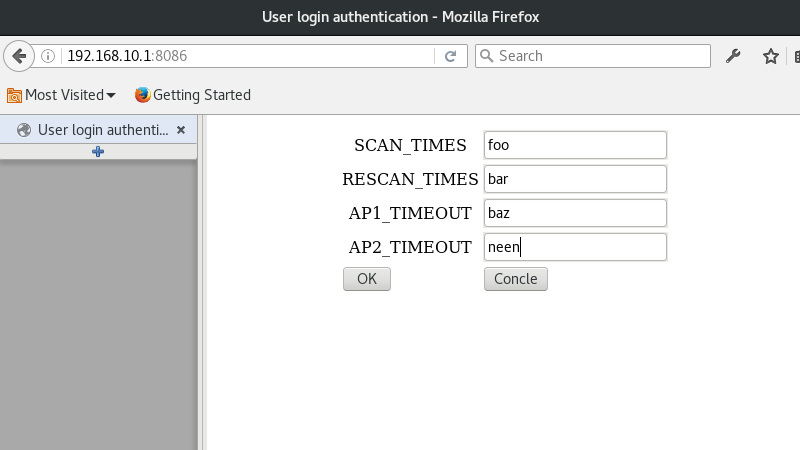 It looks like it’s asking for numerical input, so I figured I’d feed it some non-numeric strings and see what happens. 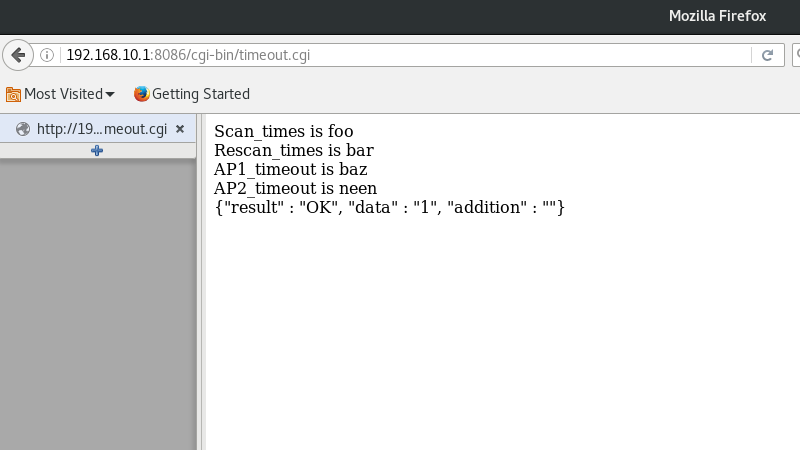 Success! We’ll see later that this form updates a conf file on the filesystem with what appears to be no validation whatsoever. I need to do a little exploring here to see if I can exploit this form to start telnetd (which is available on the system, just not running by default) and avoid tearing the rest of my cameras apart to access their serial consoles. 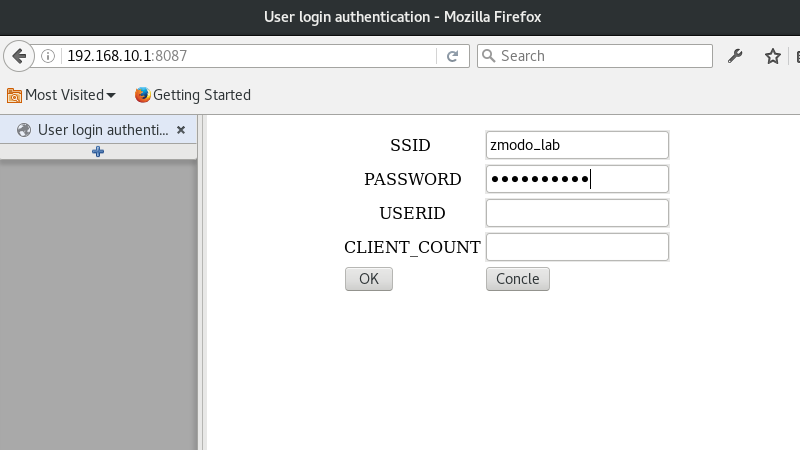 Now this looks more interesting. I setup a little lab network without any uplink and attempted to connect. I’m not sure what USERID or CLIENT_COUNT are about, but I figured the lack of input validation wouldn’t care if I left them blank. 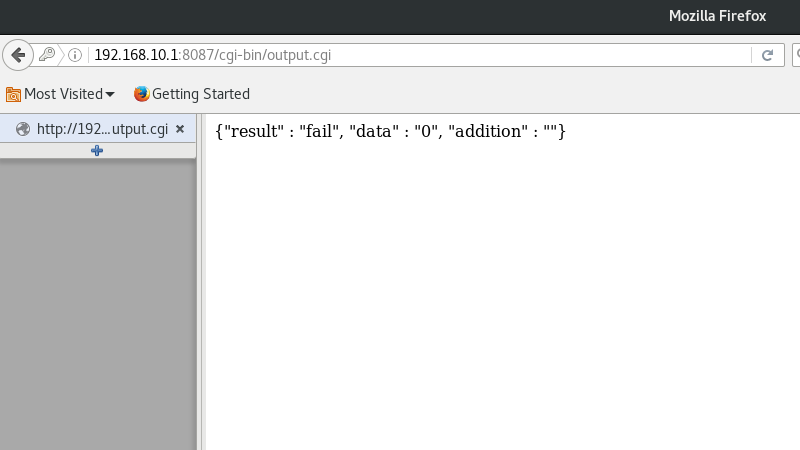 Surprise! It failed. Sad. I guess we need some values after all. Let’s try foo and bar as before. 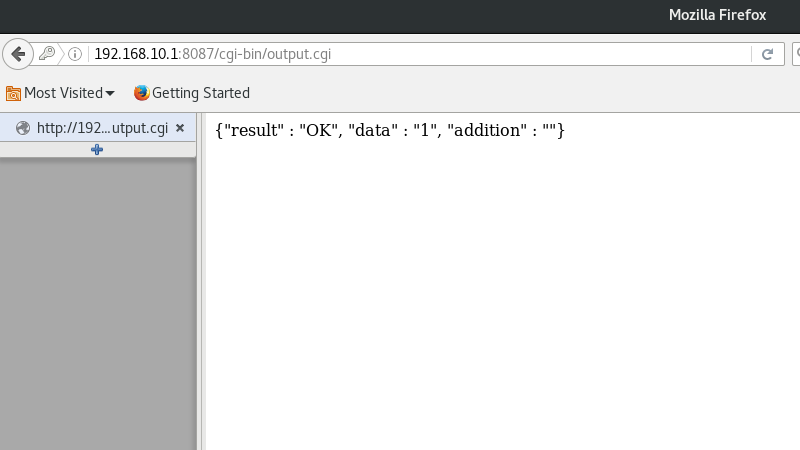 Success! I haven’t yet found which files this updates, but at this point, the camera will stop broadcasting ZMD_SAP and will join your provided network, asking for an address over DHCP. Keep in mind that these cameras only have 2.4GHz radios (RTL8188EUS to be exact), so they will not see your 5GHz networks. If all went well and it successfully joined your network, the camera will now switch from setup mode to production mode.

Let’s start by scanning the camera from a machine on the same lab network:

Sad. It looks like our httpd servers went away. I guess we’ll have to dig further into what we do have.

Thanks to the Zmodo - Local Controller project over on Hackaday, we know that most Zmodo cameras respond to commands that look vaguely like 55 55 aa aa 00 00 00 00 00 00 00 50. I created an ugly little perl script to scan the last two bytes, sending every possible combination and listening for responses. I noticed that the middle 00 bytes don’t need to be 00, but I haven’t figured out what they really are yet, so I’m leaving them alone in this scan. Every response starts with a header very similar to the command sent. Sometimes some of the 00 are changed, but the 55 55 aa aa is always there and the last two bytes are always the same as the command. Here’s a very incomplete list of commands and responses:

Poking at the network is fun and all, but let’s tear this thing apart… 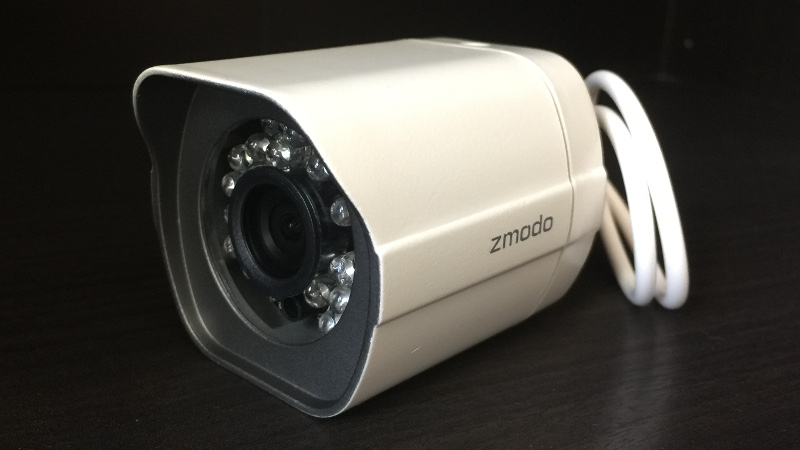 Yup, that’s a desiccant pouch like you find in beef jerky stuffed in there. I guess that’s one way to keep things dry. 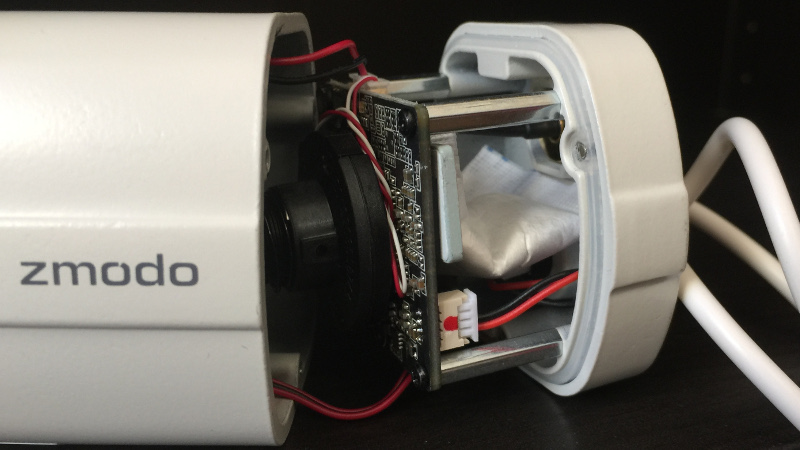 I haven’t investigated the IR LEDs much yet. Will update here if I ever get that far. 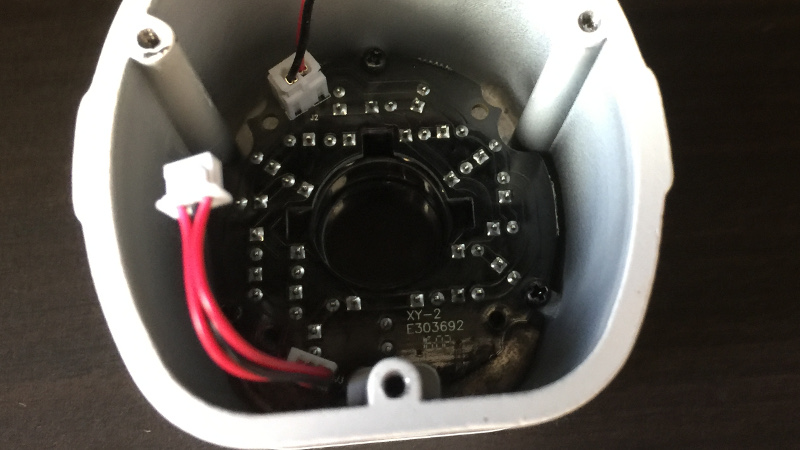 The main camera body, still in one piece. 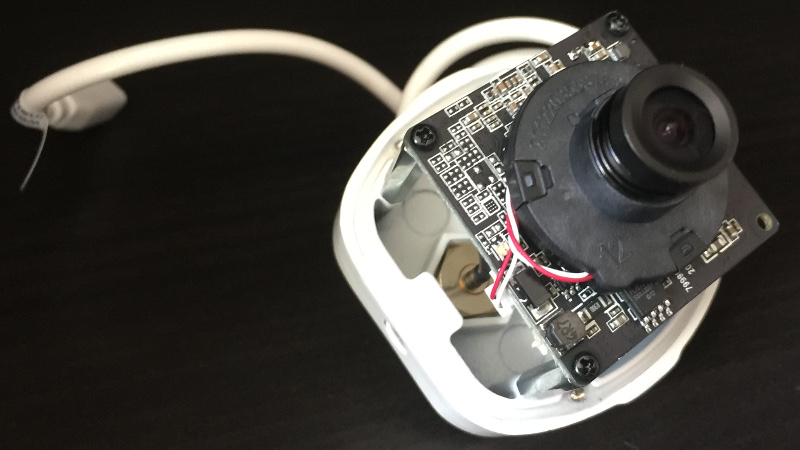 Here’s the fun side of the board. A few points of note: 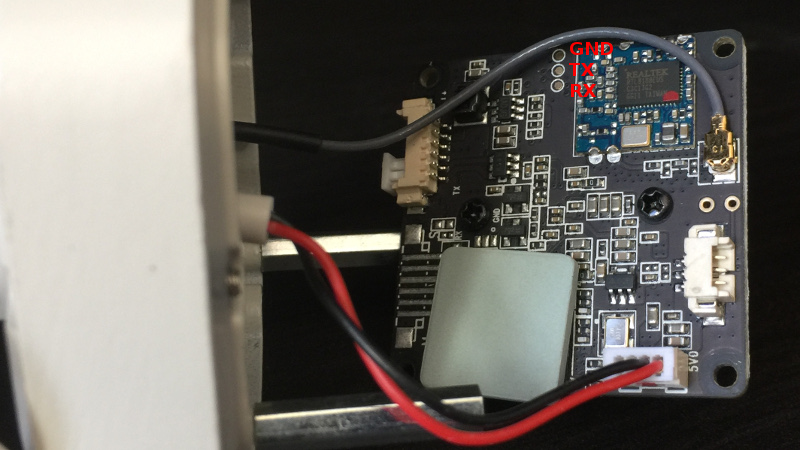 Here, we can see the surface-mounted imager under the lens assembly. Also note 79990304 REV3.0 screened on the board. We get that number back from a 00 98 request as well. 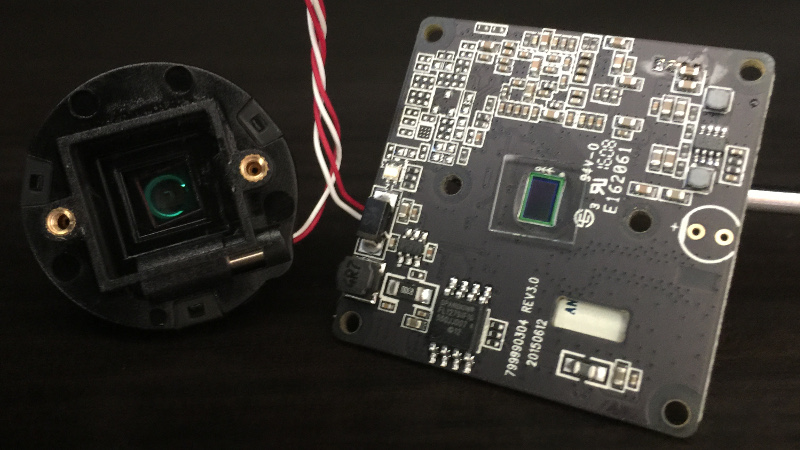 You can adjust the focus of the lens by screwing it into or out of its housing. The spring just keeps everything tight. 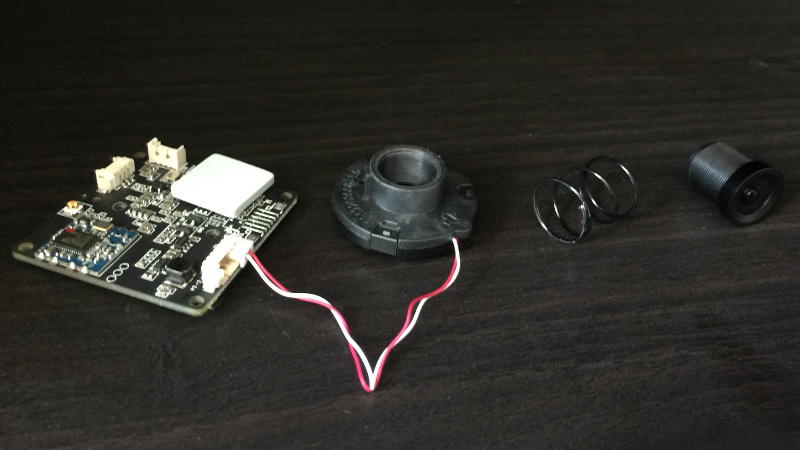 I didn’t feel like soldering anything to the board in that tiny space, so I just bent a couple female to male jumper wires 90-degrees and bread tied them to the board. I was out of rubber bands. Don’t judge. The other end is a cheap CP2102 USB<->RS232 adaptor feeding GtkTerm 115200-8-N-1. 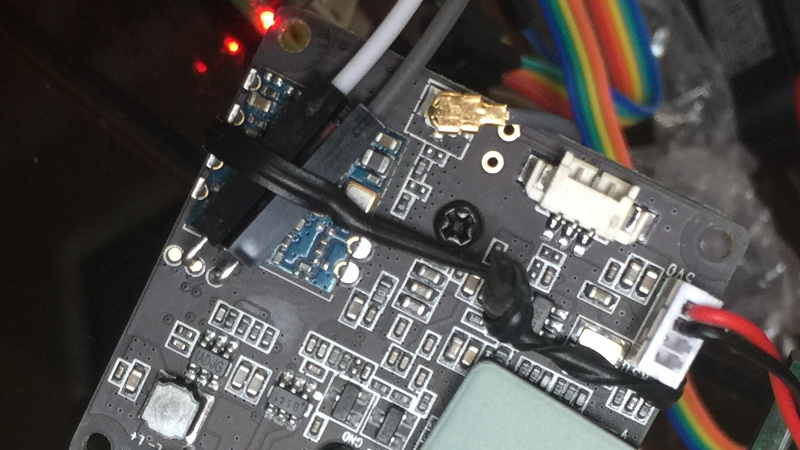 Enough fooling around with what’s already there. Let’s run our own code on this thing.

While there are lots of folks out there talking about the Hi3518 SDK, actually finding a copy of it isn’t so easy. I’m not sure what the deal is. All of the official links from HiSilicon are dead, so I don’t know if they would have contained the SDK or not. The only thing I could find out there was one guy who says that he got the SDK along with the Hi3518 board when he ordered one. At any rate, you can get the SDK here, but be warned, it’s an anonymous MEGA upload. I didn’t do the upload, but it is the SDK that I’m using. I cannot vouch for the cleanlyness / health of the SDK and it does ask for root access (to access /opt) as part of the install. I would advise installing the SDK in a dedicated / disposable VM, especially if you get it from the MEGA link.

At any rate, setting up a toolchain is fairly straightforward, but I’m lazy, so I googled around and found Nemon’s IPR1631X page where he outlines the steps. Continuing in my laziness, I wrote a little bash script to setup the toolchain for me. The whole thing should run with no errors and at the end, you’ll have the arm-hisiv100-linux toolchain available in your $PATH.

Out-of-the-box, we already have telnetd and ftpd available and we’re living on a local lab network, so dropbear is a little unnecessary, however, I’m already pretty familiar with cross-compiling it from previous projects and it’s a great test to see if the toolchain is working. Of course I put together a little bash script to build dropbear just the way I like it. After running the script, you’ll find a dropbearmulti binary in dropbear-2016.74/ which will run nicely on the camera.