The main wiring harness has 12 lines. Looking at the end of the harness that’s attached to the steppers and such, the connector is laid out like so:

Inside the junction box on the carriage, the four lines for the cross-slide stepper are broken out and the other four go off to the lamp and endstops.

The lamp has a little toggle switch on the junction box at the base of the gooseneck and looks to be a standard mini bayonet socket. We’ll try out an LED and see how it goes.

The endstops are a little bit interesting.

The carriage endstop switch is NC and is actuated by a rod in a movable holder clamped to the ways. As with the cross-slide, this mechanism only works in one direction. There is nothing to stop you from crashing the carriage into the tailstock.

The endstops are wired in series, so if either one opens, the whole circuit opens. This is great for reducing wiring, but less great in as much as you don’t know which endstop was triggered.

I’ll likely play around with these a bit in the future. If nothing else, adding positive endstops for safety. 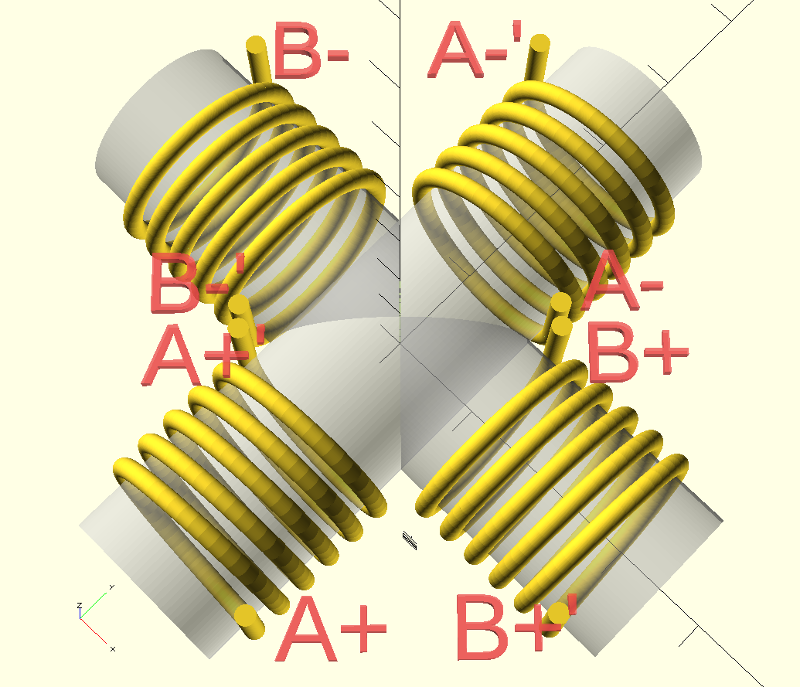 From the connector and junction box, we know that some of our wires are connected together. Combining the two tables, we get:

Comparing this table to the wiring diagram above, we’re wired in bipolar-parallel mode. Parallel gets us better torque at higher speeds at the expense of lower stall torque and higher current draw.1 The steppers are rated for 90V and 3.1A per coil, which means 6.2A since we’re in parallel. At its best, a Smoothieboard can only deliver 2A and it only has 24V to get there with, so we’re quite a bit underpowered on that side. I don’t want to cut up the wiring harness, especially considering that parallel is better in the long run. If I wind up needing more than the Smoothie can give, I’ll just have to move up to external drives.

It would be way too easy if the colors were all the same on the other side of the connector. Here’s the layout on the board side:

Combining the color/phase table with the layout table, we get:

Putting it all together on the board connection side:

Testing the board end wires for continuity, we find that Yellow & Green, Blue & Purple, Black & Brown, and Red & Orange are continuity pairs as we would expect given the above.